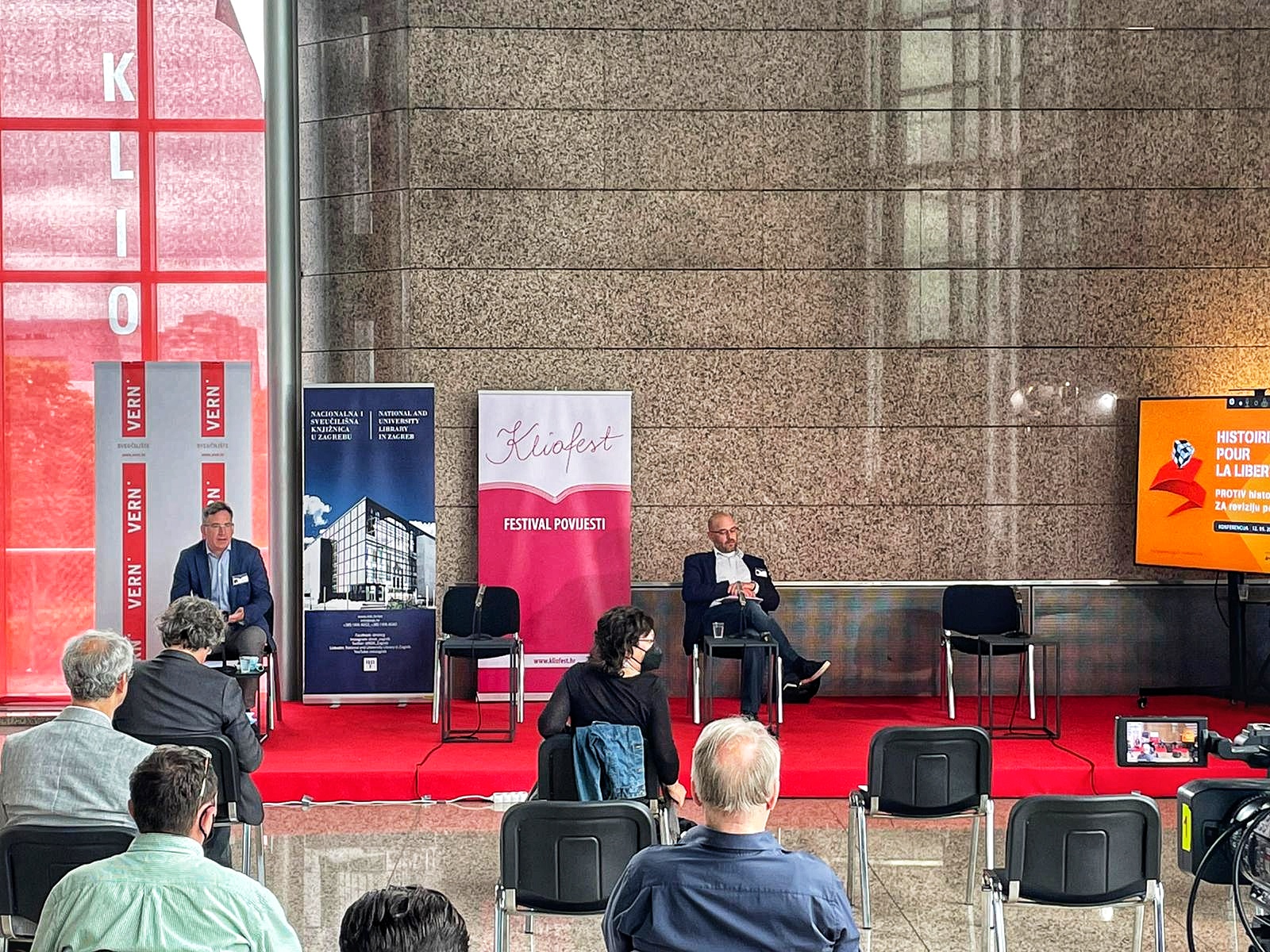 Posted at 14:23h in Uncategorized by istoricari 0 Comments

Revision of history due to new knowledge is necessary, but historical revisionism should be rejected due to daily political needs and the writing of a new ideologized pseudo-history that we are witnessing in all countries of the former Yugoslavia. That is the unanimous conclusion of the round table organized within the Kliofest history festival at the National and University Library in Zagreb, by historians Damir Agičić and Magdalena Najbar Agičić.

Eminent historians and political scientists from Zagreb (Stevo Đurašković and Aleksandar Jakir), Belgrade (Dubravka Stojanović and Milivoj Bešlin), Sarajevo (Husnija Kamberović and Edin Omerčić) and Humboldt University in Berlin (Ruža Fotiadis and Thomas Schad) spoke about the dangers that threaten and affect the relations between regional countries due to the evident politicization and ideologization of history.

– We are witnessing the creation of a new revisionist approach to history, a “new truth” that corresponds on the one hand to the needs of new political relations in the region, and on the other to the adaptation to current internal political and ideological needs, said the moderator, historian Branimir Janković. Ruža Fotiadis shared Germany’s experiences in dealing with the dark sides of this country’s past, because she says that after the breakup of Yugoslavia, everyone wanted to get rid of their dark historical traumas, present themselves as victims of others and present others exclusively as villains, either politically or nationally or ideologically. She adds how important it is for a nation to face unpleasant segments of its own history – “it is necessary to overcome or deal with one’s history” – using the German term “Vergangenheitsbewaltingung”.

Bosnian historian Husnija Kamberović says the “revisionists” have embarked on the delegitimization of Yugoslavia and socialism, not because it is considered a mere historical period in which they lived, but to thus giving legitimacy to new states, new socio-political relations, and new political elites who need a “better, different past” that proves the correctness of their current actions. Kamberović points out that “victims of communism and Yugoslavia after 1945” come to the fore, while everything that happened in the previous four years is neglected, devalued and actually revised so as to be justified; things turn around and partisans suddenly become exclusively hordes that after entering a city, do nothing and do not intend to do anything but arrest, kill without trial, persecute and oppress “honest” Bosniaks, Croats and Serbs, mostly just because they are. And according to Kamberović, these revisionists perceive history and historians only as servants of daily political demands in creating a suitable historical paradigm, regardless of whether it is true and scientifically sustainable or, as Serbian historian Milivoj Bešlin says, who points out that in Vučić’s Serbia has gone there is a tendency to move from historical revisionism to revanchism, as a basis for correcting injustices committed against Serbs and an effort to justify the wars and desires of the 1990s through a revision of World War II events.

Croatian historian Aleksandar Jakir, on the other hand, believes that in Croatia “historical revisionism” is in the service of relativizing and even denying Ustasha crimes and the Independent State of Croatia in the name of “national and state-building ideas”.

– Today’s pseudo-scientific approach seeks to reduce everything to the “Yugoslav and socialist” ideological stigmatization of the NDH and the Ustasha regime, and now, according to them, a reinterpretation of the NDH is needed, but no longer through the prism of collaboration and participation in Nazi racist intent and crime. According to Jakir, the “rehabilitation of the Independent State of Croatia” is not good for the statehood of Croatia, its historical continuity and the “health of the nation”. Dubravka Stojanović, a history professor at the Faculty of Philosophy in Belgrade, says that with the arrival of the new authorities, historical and ideological paradigms have been constantly changing in Serbia, so that in the socialist era the main victims and heroes were partisan fighters and the main culprits were the occupiers and domestic traitors, so that paradigm changed to the fact that the victims became Chetniks and non-communists and the main culprits – partisans, or their crimes. Some seven or eight years ago, the paradigm was completely revised, so the key victims became Serbs in the Independent State of Croatia, and the main culprits – the Ustashas, who often identify with the Croats and through the theme of Jasenovac, as the greatest symbol of that suffering, try to explain the wars of the 90s.

– Of course, the Ustasha crimes against Serbs are unquestionable, as is Jasenovac, but it is also becoming a key discourse for valuing today’s Serbo-Croatian relations and it is becoming a central place in mutual relations not only between the two countries, but also between the two nations. Milivoj Bešlin believes that the problem of historical revisionism is in the political discontinuity of the local area, ie our countries, because with each new political line, and there were many of them in the 20th century, there is a political-ideological revaluation of history.

Stevo Đurašković from the Faculty of Political Sciences in Zagreb says that the big problem is the omission of the context in which something happened, ie the cause-and-effect sequence of history, and he sees as a great problem of historical revisionism in the constant diminution or exaggeration of one’s own and others’ victims, in order to confirm the re-evaluation of one’s own place and role.

This text was originally published on jutarnji.hr.